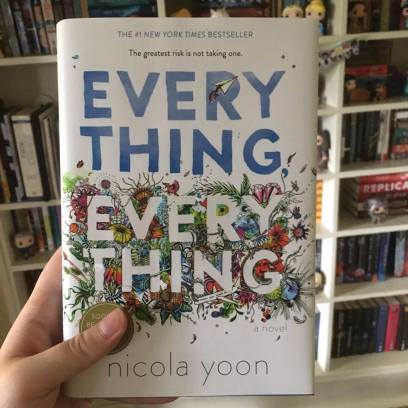 Madeline has a rare disease which makes it impossible for her to go outside. Basically, she is allergic to the world. So she lives a confined life with little-to-no social interaction, which she is satisfied with. That is, until the new neighbors move in.

She watches the family next door and memorizes their daily schedules. Madeline watches the wife garden in the morning, the husband come home every day with anger in his eyes, looking for a reason to attack his family. She watches the daughter leave cigarettes in the front yard, and then watches the son. His comings and goings. His lack of routine. She watches him climb onto the room, where she’s unable to see him anymore. And occasionally, she watches him watch her.

Madeline and Oliver eventually connect via email, typing IMs to each other. A special relationship blossoms between them, and suddenly, Madeline is no longer satisfied with her life indoors. She decides she wants more.

This was a sweet story, and I loved seeing Madeline and Oliver’s initial interactions via IM. I loved it when they met for the first time, the nervousness and the flirting.

Oliver’s character was well-developed, and I was so glad that there was more to him than “bad boy next door neighbor, likes to wear black”. I love that he never gave up on Madeline and his genuine love and concern for her wellbeing. He was more worried about her being healthy than being able to have a normal relationship with her. He was willing to settle for zero physical contact and 30 minute visits if it meant that she would be alright, so he was selfless and caring.

Madeline was also an easy character to like. She wasn’t totally pleased with her health situation, but she was living with it, which is a lot better than I would be doing. But she was also strong and when she finally started thinking for herself, she stuck to her guns and she did what she needed to.

Unfortunately, I predicted the ending, but was still relatively satisfied with it. This was a quick, adorable read, and I can’t wait to see the movie now!

3 thoughts on “BOOK REVIEW: Nicola Yoon “Everything, Everything””