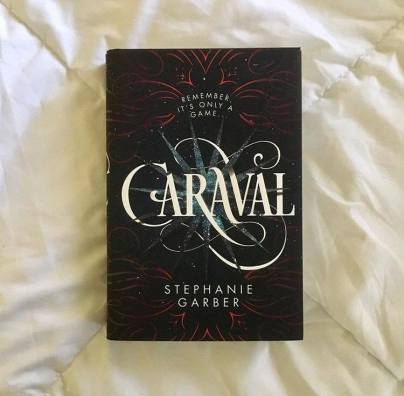 This book took me by surprise. I knew of the hype surrounding Stephanie Garber’s debut novel; however I knew very little about the actual story. When I finally started it, I was still blind, which is why it’s so difficult for me to write any sort of synopsis for you here: I want you to be as surprised as I was.

Caraval is beautifully written, and almost immediately, you’re swept into the beautiful world that Garber has created. In her story, we follow the main character Scarlett Dragna, who lives a very sad, dismal life with her cruel father and darling sister, Donatella, who she would do anything to protect. After years of dreaming and hoping, Scarlett and her sister suddenly have the opportunity to go to Caraval, a magical performance and game where the audience participates and the winner is awarded with one wish. Once there, however, Donatella is promptly kidnapped, and it soon becomes evident that it’s all a part of the performance. With the stakes much higher, Scarlett must solve a series of clues and riddles if she wants to win the game and find her sister, preferably alive.

This book was such a wild ride. It’s been such a long time since a book has made me audibly gasp, both with fear and surprise. It’s been so long since a book has left me both frustrated and enchanted. The story is out-of-this-world amazing, and I’m so glad that I read it and I can jump on the bandwagon.

Scarlett is a wonderful character, but I didn’t always feel this way. In the beginning, she was skittish, hesitant and fearful, and while she had dreamed of going to Caraval as a child, as an adult she was much more concerned with safety and survival. This makes sense considering her horrible home life, where her father beat and terrorized the poor sisters. However, as the story progresses, you see Scarlett transform and develop into this intelligent, strong woman and I am just here for it.

I loved the mystery that surrounded this whole story, particularly around the creator of Caraval, Legend. We hear about his tragic history and how he obtained his magic; he’s a curious character with strange motivations. He leaves notes and clues that seem to be specifically meant for Scarlett, and you get the sense that there’s more to the game, and that the Dragna sisters were invited to Caraval for a reason. I spent the entire book trying to guess who Legend might be in case we had met him already while he was in disguise. I was so intrigued by his character and loved the darkness he brought to the story.

Scarlett’s mysterious companion throughout was Julian, a young sailor that Donatella had befriended at the beginning of the story but of course, left him with Scarlett when she was kidnapped. I was constantly trying to figure this guy out. Can he be trusted? Or is he an inside man, trying to mess Scarlett up? What’s his deal? I went back and forth with him throughout the entire book, and I still hadn’t decided when it was finally revealed.

I adored everything about Caraval. The plot, the characters, the fantastical elements, the whimsy, the mystery, the plot twists; I was here for all of it. This was by far my favorite read of 2017 so far and has also earned a place in my list of all-time favorites. I highly recommend this read and hope that you will enjoy it as much as I did.