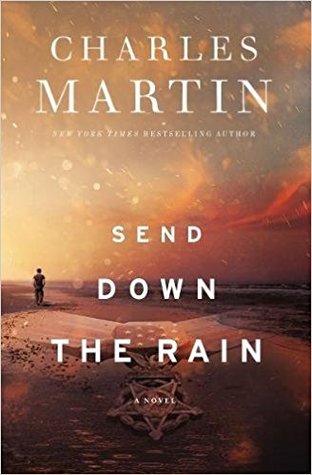 Title: Send Down the Rain

Allie’s second husband is killed tragically when his 18-wheeler crashes into the rocks near their home in Cape San Blas–the tanker was full of fuel and the explosion could be seen on overhead satellites. She’d already lost the beloved waterfront restaurant her parents started and now losing her husband, no matter how unfulfilling their marriage was, might just push her over the edge.

Joseph’s time in Vietnam left him with scars that never seemed to heal. No matter how he’s tried to love or what he’s tried to do since then, he can’t pull himself out of the wreckage of his former life. His trust and security shaken, he isolates himself in a cabin. But every morning, he faithfully pours two cups of coffee, drinking his while he sits with the second, and then pouring out the full cup.

The years have built so much distance between them, but it’s the secrets that may be their final undoing. Send Down the Rain reminds us of the beauty of truth . . . and the power of love to wash away the past.

This book took me on a dang roller coaster ride and I loved it.

I had no idea what to expect from this since this is my first time reading anything by Charles Martin; also, I can tell you now that the synopsis does not provide nearly enough information to prepare you for the flurry of emotions that you’re going to end up feeling. There are so many layers and different story-arcs in this book that no one would be able to fit the essence if this in a short summary.

Send Down the Rain follows Joseph, a veteran in his 60’s who daily fights demons and the memories of his time at war. In no particular order, Jo-jo’s past begins to unfold for the reader in surprising twists and heartwarming turns, and you grow to truly love his kind, giving, broken soul.

Each of the secondary characters have either been directly or indirectly affected by the selfless acts of Joseph: Catalina and her two children, who he rescues from Juan Pedro and 5+ years of captivity; Allie, Joseph’s high school sweet heart who he saves both physically and emotionally on numerable occasions; Bobby, his brother whose status is all thanks to him; Suzy, a radio host at a station that Joseph calls into frequently to relay war stories. Ultimately, he manages to touch the lives of thousands of people by the end of this book through his testimony and heroic actions.

This book snuck up on me in a way I never expected. Of course, you never open a book thinking you’re not going to love it, but I had no expectations going into Send Down the Rain. Yet by the time I was finished, I had shamelessly added every book Charles Martin has ever written to my reading list.

Some of the subject matter is a little heavy but it never feels overwhelming. The writing is lovely and easy and smooth, and by the halfway mark there was no stopping me: I was hooked. All of the characters were believable and likable, and truly there was little to hinder my enjoyment of this.

Later in the book, Joseph recounts to Allie how he had returned to their hometown on several occasions to check and see how she was doing. He never actually revealed himself to Allie any of these times; always watching and observing from a distance. Even though Jo-jo’s nearness ended up saving Allie’s life a few times, I can’t help but think that his behavior is a little creepy and stalker-ish.

Also, without revealing any spoilers: there’s a part towards the end of the book where some distasteful information comes out about Joseph, and his friends all feel rightly betrayed. However, I feel they were unnecessarily cruel to him in the events that followed this reveal, especially considering all the kindness and generosity he had showed them throughout this entire book.

Overall, this was such a sweet, heartfelt story, and I truly hope to read more by this author soon. Thank you to Smith Publicity for sending me a copy for review!

2 thoughts on “BOOK REVIEW: Charles Martin “Send Down the Rain””