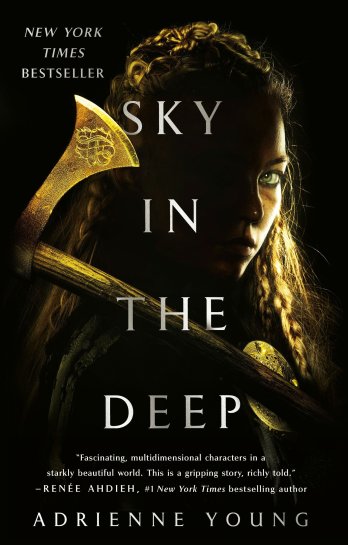 Title: Sky in the Deep

Raised to be a warrior, seventeen-year-old Eelyn fights alongside her Aska clansmen in an ancient rivalry against the Riki clan. Her life is brutal but simple: fight and survive. Until the day she sees the impossible on the battlefield — her brother, fighting with the enemy — the brother she watched die five years ago.

Faced with her brother’s betrayal, she must survive the winter in the mountains with the Riki, in a village where every neighbor is an enemy, every battle scar possibly one she delivered. But when the Riki village is raided by a ruthless clan thought to be a legend, Eelyn is even more desperate to get back to her beloved family.

She is given no choice but to trust Fiske, her brother’s friend, who sees her as a threat. They must do the impossible: unite the clans to fight together, or risk being slaughtered one by one. Driven by a love for her clan and her growing love for Fiske, Eelyn must confront her own definition of loyalty and family while daring to put her faith in the people she’s spent her life hating.

I definitely see what the hype is about. I also see why there have been a few big name reviewers who did not like this.

Some complaints included flat, emotionless characters and a dull story/writing. I agree that there were some slow, boring parts throughout the book. However, I felt that the characters, particularly Eelyn, were strong and I absolutely felt connected to our MC. I felt her pain and was invested in her journey.

Another thing I loved was the slow-burn, hate-to-love romance. It’s one of my favorite literary tropes and I thought it was well done here in Sky in the Deep. I also loved the familial elements and love in this story: the father-daughter bond, the brother-sister bond, the father-son bond.

This is a more personal preference, but I actually have a hard time reading fight/action scenes, and there’s a lot of that here. It’s not that the action in Sky in the Deep is bad; however, it tends to make me anxious and I end up skimming so that I can just know what happens.

All in all, this was a strong debut, but I don’t think it was everything that everyone else in the world is making it out to be.