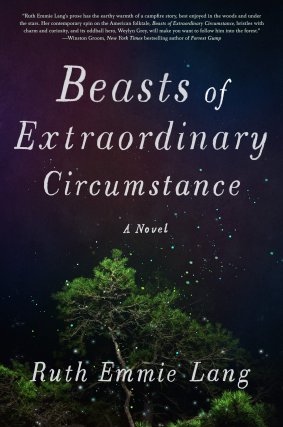 Beasts of Extraordinary Circumstance is the first Book of the Month that I ever selected. I’m ashamed it’s taken me this long to get to it, considering I’ve read several other BOTM picks since then. Oops.

That being said, I had heard lots of good things about this, so I finally picked it up the other day! Okay, I found the audiobook at my library and I listened to it. Sue me.

That being said, I really enjoyed this. I’m not sure what I expected, although I knew this was a fantasy labeled as “magical realism”. It follows a boy named Weylyn Grey through the perspectives of those closest to them. First there’s the girl who delivers meat for her father to Weylyn and his wolf pack. She’s immediately fascinated by him and his life with the wolves, and over time decides to run away with them. Strange things seem to happen around him, though, but she doesn’t think much of it at the time.

Then there’s the foster family that takes Weylyn in after he and the girl are discovered with the wolves. Specifically his foster sister, who takes a liking to him and bonds with him. There’s the general education teacher who desperately wants children who finds a void filled with Weylyn’s company.

So many people touched by Weylyn’s presence in their lives, while still odd things tend to happen around him. The story sees him well into adult-hood and shows his power over nature and people growing. It’s such a heartwarming, lovely story that will just make anyone feel good.

Weylyn is naive as a child, obviously, considering his time with the wolves, but it seems to follow him years later as a grown-up. I can’t decide if I appreciate this or not. On one hand, his naivety was charming as a child, but it makes him seem clueless and stupid as an adult. But it’s easy to dismiss with such an adorable character like Weylyn.

This was just a very sweet, feel-good story that will be enjoyed by anyone who likes a happy ending.