Hey, y’all! I know it’s a little late for a wrap-up, but better now than never, right? I read a total of 15 books in the month of March, and only one of those was a DNF! I’m trying to be better about the books that I leave unfinished, especially since it’s difficult and also frowned upon to review unfinished books. However, it’s also my philosophy that life is too short to read books that you’re not enjoying, so why waste your time? Thankfully, the books I read this month were mostly good!

The first book I started and the only book that I did not finish was Love, Hate and Other Filters by Samira Ahmed. I wanted to like this book and I was hoping that it would be more moving and meaningful for me, but the only thing I was feeling was the weird, cringey romances. I couldn’t even see anything beyond the awkward love triangle that the main character found herself in. So unfortunately, a potentially important story was ruined by bad teen romance.

Istanbul Days, Istanbul Nights by Leonard Durso was sent to me by Smith Publicity and was my second read in March. This was pitched as a Romeo & Juliet reimagining and while I was thrown by the lack of Shakespeare parallels, this is still a lovely story for those who enjoy diverse characters, multiple POVs, love, loss and friendship.

Next up, in preparation for the movie that came out earlier this month, I read A Wrinkle in Time by Madeleine L’Engle. This was a strange but sweet little book that I’m glad to finally have completed, and was also glad to have been able to see the film. It was well-made and surprisingly heartfelt. Sadly though, I don’t think I liked this enough to continue the series unless someone convinces me otherwise.

The biggest disappointment so far this year had to be Heart of Iron by Ashley Poston. This was pitched as an Anastasia retelling which is basically all you have to do to get me to buy something: slap Anastasia on it. I’m obsessed with anything related to Anastasia and this book ripped my heart out, man. It was just so bad. Absolutely no traces of the original Anastasia; just a lost princess story with a weird robot romance. No freaking thank you.

Guilty pleasure time: Defiance by C. J. Redwine was, objectively, horrible. It’s full of plot holes and was honestly sort of ridiculous, but I had so much fun reading it. I can’t believe I’m saying this, but I can’t wait to read the next two books. They’re definitely on my immediate TBR because I’m stupid and want to lose more brain cells? I don’t know, but I’m so ready for more. 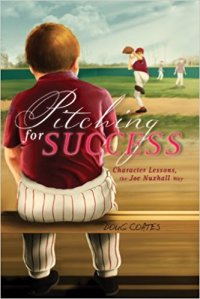 Next one was a random read: Pitching for Success by Doug Coates. I won this random little book in a Goodreads giveaway, and when I say little I mean tiny. I read the whole thing in about 15 minutes. Still, I wouldn’t have read it otherwise, but I felt I owed it to the author who I won the book from to actually read and review it, so I did. You can check it out on my Goodreads.

Another quick read was Simon vs. the Homo Sapiens Agenda by Becky Albertalli. This book was a little too immature for my taste, but I did manage to finish it one less than a day.

Definitely one of my favorite reads in March was Six of Crows by Leigh Bardugo. Technically, I read this book back when it first released, but I’m pretty sure I was in a slump and I forced my way through the book when I really wasn’t in the right frame of mind for it. This time around, though? It was absolutely incredible and I can’t believe I didn’t read it to the fullest extent sooner! Crooked Kingdom is definitely going to be on my immediate TBR, hopefully to be read sometime in April.

The Widower’s Wife was read for a book club and I have to say: while the end was semi-satisfying and justice was served in the end, I can’t say I really enjoyed any of the rest of this story. It was predictable and I didn’t think it was written particularly well, either. Disappointing considering the fact that I love mysteries and thrillers, and this didn’t turn out to be either one.

For my Throne of Glass series reread, I read Crown of Midnight for the month of March and it was just as incredible as it was the first time. I’ve been surprisingly really enjoying rereading these books and find that I have a newfound appreciation for the earlier installments. Sarah J Maas is a genius and Throne of Glass is an absolutely incredible series.

Another favorite read this month was Ready Player One by Ernest Cline, and I adored this. The movie definitely did not do this amazing story justice so I’d advise anyone who watched the movie and thought they could skip the book to read the book anyway. I promise you won’t regret it.

Next up was Morgan Matson’s latest: The Unexpected Everything. This book had literally everything going for it… except a likable main character. At least for me, I’m sure there are many people who liked Andie, but me? I couldn’t relate to her on any level; not the decisions she made or the things she said or the lies she told, none of it. The book had tons of potential otherwise, and in the end, still a great Matson read.

Another slight disappointment this month was Daughter of the Pirate King by Tricia Levensellar. This book had all the potential: snarky, strong female character, swoony love interest, interesting magical elements. Unfortunately, I felt the book was incredibly repetitive and Alosa spent most of the book doing the exact same things. It wasn’t until the last 75 pages or so that things got interesting, but by then I was so ready to be done that I couldn’t bother to care. Still, I’m definitely planning to read the sequel because I have hopes that it will be better than the first book. 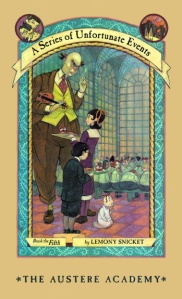 Also, finally trying to continue the rest of the Series of Unfortunate Events! I’m absolutely loving the Netflix show which is inspiring me to want to read the rest of this series, which I started years ago and never finished. So I read The Austere Academy which was appropriately frustrating, unfortunate and dark. I’m longing for a day when the Baudelaires finally get a happy ending. 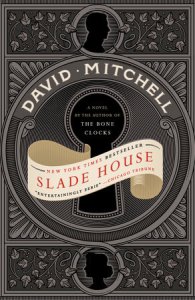 And finally, the last book read in March: Slade House by David Mitchell. This was a haunted house/ghost story that put off some very nostalgic vibes for me, reminding me of some of the scary stories my grandpa used to tell me. I mean, my grandpa’s stories were better, but it’s the feels that count. This book was strange and creepy, and while it had some good writing, I never felt fully connected or invested in the story.

And that’s that, folks! I’m pretty proud of all I read this month and I’m happy with the progress I’m making on my Goodreads reading goal. At this rate, I should definitely be hitting my 100-book reading goal for the year 2018.

How are y’all doing on your reading goals? Let me know in the comments, and let me know if you’ve read any of the books I listed in my wrap-up! Aloha.

In this post-apocalyptic world, monsters roam due to a company drilling too far into the Earth’s surface, unleashing madness. Military is decimated, government disbanded. Their hope lies with a small group of soldiers and scientists who attempt to take down the beasts on their home turf, but their plan fails. Instead, those left set up walled city-states to protect any surviving citizens.

The “Commander” is in charge of Baalboden, where Rachel (and at one time, her father) lives. Except Rachel’s father, a courier, has been missing for over 60 days; long enough to declare him officially dead. She doesn’t believe this for a second, but in the meantime she must be given a new Protector. Unfortunately, according to her father’s will, instead of being put under the care of her surrogate grandfather, Oliver, she’s meant to stay with Logan.

Logan, her father’s apprentice, the boy Rachel declared her love for two years previous, and the one who rejected her.

Is there such a thing as a “fluffy” dystopian? Because that’s exactly how I would describe Defiance.

But boy, did I have fun.

This book is honestly ridiculous; and the more reviews that I read, the more I realize how ridiculous it is. It checks off every single item on the YA trope list: female MC who doesn’t know she’s actually a supermodel (also she can fight). Teenage boy love interest who’s super protective. Character deaths that incite rebellion. Antagonist who’s evil just for funzies. Lots and lots and lots of angst. Yet for some odd reason, I found myself glued to the pages.

I guess sometimes, everyone needs a break. Everyone needs to read a mind-numbing dystopian to make you feel grounded.

This book isn’t all bad. After all, I gave this almost 4 stars, and not just because it killed my brain cells. I truly enjoyed aspects of the story, and I really did think that Logan was precious. He’s the post-apocalyptic geek; extremely smart and good with gadgets. Also, reading from his POV was actually quite entertaining, as opposed to reading from Rachel’s POV, which was either “OMG, I can’t do life anymore” or *stab, stab, kill, kill*.

I know I’m not making this book sound very appealing; I just couldn’t resist the opportunity to rag on it a bit. To be perfectly honest, the world-building leaves much to be desired, and Rachel and Logan do some really stupid things throughout the book. That being said, I still enjoyed their relationship and the way it plays out, and I loved the pacing. It was easy for me to stay engaged to the story and keep reading.

I’ll definitely be finishing this trilogy because I’m interested to see what happens. I see a love triangle forming in the future so we’ll be able to check that off our trope list and I can die happy. Defiance doesn’t break down any barriers or push the boundaries of YA fiction, but it can certainly be a good time if you let it.